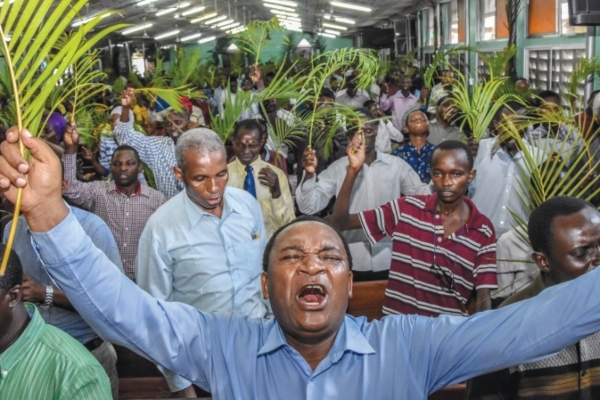 There was no lockdown, no recession, and just 21 official deaths in Tanzania – which goes to the polls this month. But with the country’s main trading partners reeling from lockdown-induced job losses, Zachary Ochieng asks whether economic contagion might be the real threat.

When the world went in to lockdown, Tanzanians went to church.

They were told to by their president, John Magufuli, who implored citizens to flock to churches and mosques to vanquish the ‘satanic’ virus.

Covid-19, insisted the devout Catholic, was nothing to be ‘afraid’ of, adding that the economy was ‘more important than the threat posed by coronavirus’.

Schools and airports were briefly closed, and large, secular gatherings banned, but throughout the pandemic, Tanzanians have continued to go to work, travel on public transport, and shop, drink and eat in public pretty much as normal.

It was a bold move on Magufuli’s part, especially with presidential elections slated for October 28 – but not an entirely novel one, prayer vigils aside.

Tanzania’s pandemic response loosely mirrored that of Sweden, which did not shut down its economy, hoping that social distancing, home-working, and bans on large gatherings would mitigate the coronavirus’s spread and lead to some form of herd immunity being developed.

But while Sweden has emerged with fewer deaths than many European countries that locked down, including the UK, Spain and Belgium, Covid’s true toll in Tanzania is less clear.

At the height of the pandemic, videos of alleged secret night burials went viral on social media, leading to allegations of a cover-up by the Magufuli regime.

Zitto Kabwe, leader of the opposition ACT-Wazalendo party, claimed that the number of infections was as much as seven times higher than the official figure, which would have placed Tanzania among sub-Saharan Africa’s most affected countries at the time.

The government, through its chief spokesman Hassan Abbas, however, dismissed the night burial allegations as ‘nonsensical’.

Meanwhile, the unexplained deaths of three MPs who presented with symptoms, and the authorities’ subsequent decision to fine or close down media outlets that linked the legislators’ deaths to Covid-19, was seized on by Magufuli’s critics as proof that more than 21 people died with the virus.

The president similarly trashed a US embassy warning that the hospitals in Dar es Salaam were overwhelmed with Covid-19 patients at the start of the pandemic, and instead claimed the rate of infections had been exaggerated and those who were found to have contracted the virus were actually false positives. (The government claimed to have secretly tested a papaya, a goat and a quail for Covid-19, with all results returning positive for the virus.)

Whether Covid-19 has been eliminated in Tanzania, as the government insists, remains a subject of debate.

The possibility that Tanzania has developed some form of herd immunity after only a few months of spiking cases has been bandied around by some government insiders.

But with most of the Covid-19 testing centres now shut down, and people no longer going for tests, it is very difficult to assess the true Covid-19 situation in Tanzania.

A NewsAfrica insider – with access to Tanzania's ICU departments – reported that ICUs were indeed largely deserted when they visited hospitals recently.

And with ‘official’ death tolls across Africa way below that of Europe and the Americas – thanks in part to the continent’s youthfulness, but perhaps, also, undercounting across the board – Tanzania’s 21 deaths, from a country of 55 million, is not as unusual as it sounds.

Burundi, for instance, is claiming just one official death from Covid-19, despite their president allegedly dying with it.

Nigeria is claiming just over 1,100 deaths in a country of nearly 0.2 billion.

And Tanzania’s neighbours Uganda and Kenya have posted official death tolls of just 79 and 731 respectively, despite having large populations like Tanzania, and, in the case of Kenya, relatively high antibody levels, meaning the virus must have circulated widely despite the lockdown.

But as debates rage about Tanzania’s unconventional response to the pandemic, and whether its true death toll may be closer to Kenya’s, there are signs that Tanzania’s economy, at least, might not be as adversely affected as its lockdown-embracing neighbours.

Projections by the African Development Bank predict, for instance, that Tanzania’s economy will grow by five per cent this year, making it the best performing economy in the East African Community.

Kenya, on the other hand, has seen more than 1.7 million people lose their jobs during the pandemic, with millions pushed into extreme poverty.

The situation in Uganda, which had one of the harshest lockdowns on earth, is equally grim.

A report by the Development Initiatives in August estimated that ‘about 23 per cent of the urban poor could have lost 100 per cent of their daily income during and after the lockdown’, and concluded that ‘the socioeconomic consequences of [containing] Covid-19 currently outweigh the positive health impact of limiting its spread.’

But while Magufuli’s approach may have spared the country from the sort of mass unemployment seen elsewhere thus far – a big vote winner under normal circumstances – there have been rumblings about his laissez faire economic approach.

Unlike Kenya, whose government injected an economic stimulus package to mitigate the effects of the pandemic, Tanzania did little to support businesses impacted by Covid-19, particularly those in the hard-hit tourism sector, which accounts for nearly a quarter of foreign exchange earnings.

Tanzania’s lucrative mineral sector has also been badly damaged by the global economic downtown and disruptions to international supply chains.

On the other hand, the agricultural sector, which contributed 27 per cent of Tanzania’s GDP in 2019 and employed about 67 per cent of the total workforce, has remained largely unaffected by the pandemic so far, with agricultural growth expected to decline slightly from an average of five per cent in 2019 to a still-healthy three per cent growth this year, according to a May 2020 report by Deloitte.

The levelling off has been blamed on a locust infestation that destroyed crops near Mt Kilimanjaro, coupled with decreased demand for export-focused cash crops, such as coffee, in lockdown-hit Europe and Asia.

In fact, there are signs that the global downturn might store up future problems for Tanzania, with the report warning that ‘the sector’s jobs remain in the balance,’ unless the export of key cash crops picks up again.

Meanwhile, the World Bank warned in June that growth slowdown in Tanzania’s main trading partners would lead to an increase in poverty in Tanzania too by default.

It warned that an economic slowdown in Europe, Asia and other major trading partners had reduced demand and prices for Tanzania’s agricultural commodities and manufactured goods, and added that international travel bans and fear of contracting the virus are expected to inhibit the recovery of tourism, which had been one of the fastest-growing sectors in the economy before the pandemic.

‘Tanzania’s macroeconomic performance has been strong for the last decade, but the current crisis is an unprecedented shock that requires a sustained, targeted policy response’, the report added.

It concluded that the volume of exports will shrink by around 10 per cent, as disruption pushes up the costs of imports and transportation, while the hit to tourism, export-oriented manufacturing and related services had already shrunk the disposable income of employees in those sectors and thus affected owners of small- and medium-sized businesses, which represent more than 70 per cent of total businesses.

In short, the report implied that the decision by almost every other country in the world to lockdown is expected to lead to a global downturn that will act like a contagion, dragging down livelihoods and jobs in countries that didn’t lockdown, including Tanzania and export-reliant Sweden.

But with tourism already recovering – despite critics claiming the rumours of unreported cases would dissuade tourists from returning to Tanzania’s beaches and game reserves – might talk of an impending economic downturn by contagion or otherwise be overblown?

The International Growth Centre gave some credence to Magufuli’s economy-first approach, predicting the economic shock would be slightly lower in countries that didn’t lock down, and argued that governments in developing countries could not respond to Covid-19 as solely a health crisis, given the economic and political crises that had also emerged.

Whether Tanzanians at risk of losing their jobs will blame Magufuli for not offering more financial support, or foreign governments for causing a global downturn, remains to be seen.

But with a divided opposition, and the economy still largely intact, the president’s prayers, at least, look set to be answered on election day.